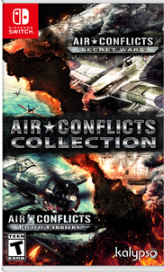 Take to the skies with the combat flight simulator Air Conflicts Collection for Nintendo Switch! This collection contains remastered versions of two classic flight sims: Air Conflicts: Secret Wars and Air Conflicts: Pacific Carriers. In Secret Wars, pilot your way through seven different campaigns and 49 missions set during World War I and World War II. In Pacific Carriers, choose to fight for either the US Navy or the Imperial Japanese Navy, climbing into the cockpit and immersing yourself in the famous battles of the War of the Pacific. Both games feature plenty of action, dozens of planes and weapons, and four robust multiplayer modes.