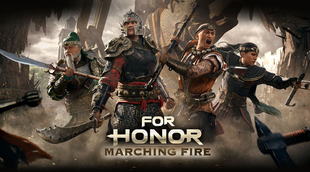 NEW PVP GAME MODE: BREACH
Live the fantasy of storming or protecting a well-fortified castle equipped with ballistas, fire cauldrons, and archers.
Attackers must breach the castle using a battering ram, while defenders must try to stop them at all costs to protect their lord.
This strategic, team-based multiplayer mode brings an adrenaline-fused layer of depth to the game, along with three new maps.

NEW HEROES: THE WU LIN FACTION
The Wu Lin are a faction of warriors within the walls of Ancient China. Four Wu Lin warriors now travel West seeking vengeance from war, betrayal, and personal tragedies. They fight to claim their rightful place in the next Dynasty.

SIGNIFICANT GRAPHICAL ENHANCEMENTS
Marching Fire also brings free graphical enhancements to the world of For Honor with updated and enriched textures, improved global illumination, and new sky and cloud technology. Further improvements include an updated user interface that will allow players to get into matches faster.